Finding a perfect video editor for your smartphones and tablets isn’t hard. Let’s see what are the best apps like Funimate video editor from the given list.

Why do users today need a good video editor?

With the rise of the recent form of social media platforms like TikTok (formerly also known as Musical.ly), it has become almost a necessity on the part of the users to have a video editor which could provide them with amazing production quality while also having a user-friendly interface.

User-friendliness is necessary because users new to these platforms consider doing video editing as a daunting task that only professional video editors could do.

Funimate is a leading app in providing video editing features to its users. Crafted by a developer called AVCR Inc., the app has an astonishing rating of about 4.3 stars out of 5 at the Google Play Store given by well over half a million of its users.

You can imagine its popularity by its total download count on Play Store which is above 5 million. The overall users around the globe are around 25 million according to the developer. 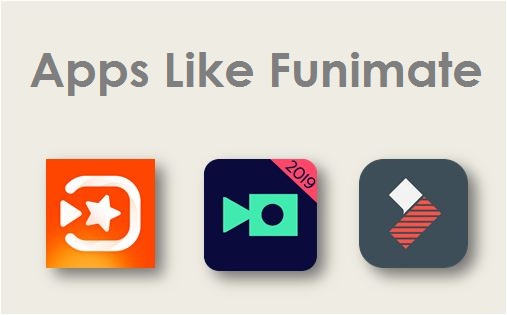 These apps share similar functionality of video editing and user-friendliness are as follows:

Note: The data given below for these applications is from the Google Play Store.

We will start our list for Funimate similar app with Viva Video by QuVideo Inc. The app is designed specifically for users who want a sophisticated app for editing their videos before uploading them to their social media accounts.

The second in line for our list is Magisto by Vimeo. The app boasts the tag of being Play Store’s Editor choice in the video editing segment as well as an award by Consumer reports for being the number one editor on Play Store. This can also be an amazing alternative to Funimate.

Magisto offers the following features in its application:

We end our list with FilmoraGo. It’s once again, a Play Store Editor’s choice is the list. It claims that only takes three steps are required on this app to edit a video i.e. at first select then create and then finally share on your social media accounts.

Key features of FilmoraGo are as follows:

These are the list of apps like Funimate with offer video editing features. If there are any new video editing applications, do comment so that others will know it.